Bernedoodles vs Sheepadoodles: What are the Key Differences? 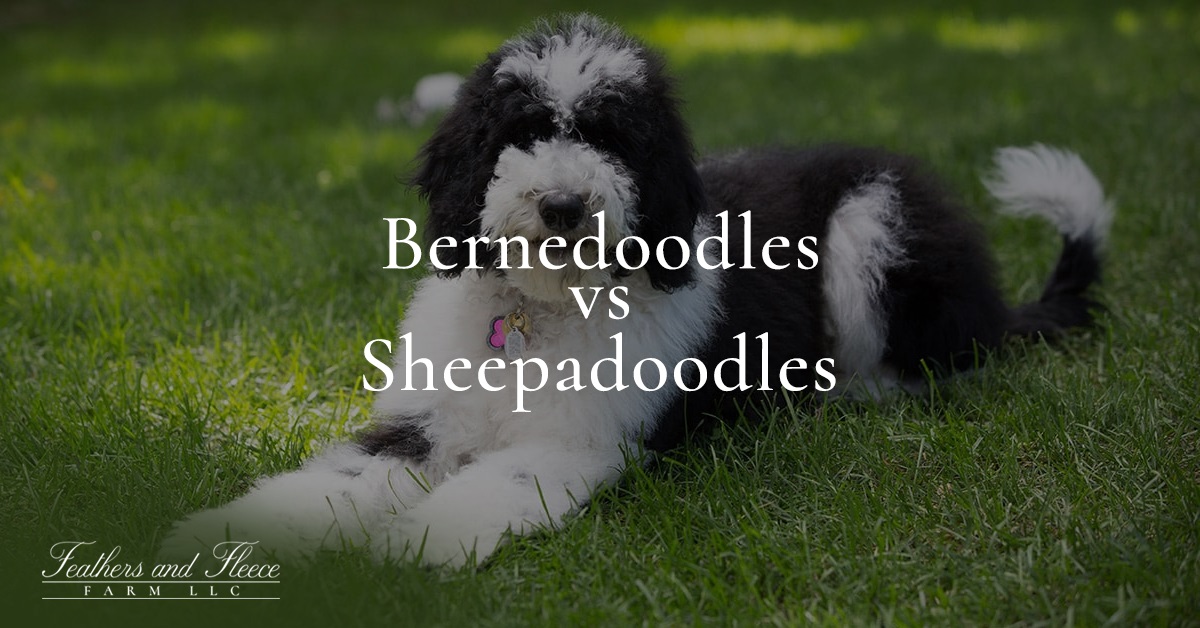 Bernedoodles and Sheepadoodles are two extremely popular breeds, but there are several minor differences to learn about and understand. Let’s tackle the key differences separating bernedoodles from sheepadoodles.

What is a Bernedoodle?

The Poodle and the Bernese Mountain Dog are combined to create the Bernedoodle. Although Sherry Rupke of Swissridge Kennels in Canada claims to be the original breeder, there may have previously been cases of crossbreeding.

Breeders wanted to create a dog that combined the strength, tenacity, and devotion of the Bernese Mountain Dog with the brains, vigor, and low-shedding coat of the Poodle.

The Bernese Mountain Dog was bred to labor on ranches and farms, pulling heavy carts, protecting houses from predators, and moving cattle in its native, cold-climate Switzerland. They were a very popular farm dog because of their extraordinary strength and muscular physique.

Funny and endearing pets, Bernedoodles like playing outside as much as they enjoy curling up on the sofa. They make the ideal family dog and are especially fond of kids. Additionally, they get a coat that is almost hypoallergenic from their poodle parent.

What is a Sheepadoodle?

Large and fluffy-haired, the Old English Sheepdog is often seen on the English courtside, nicely shielded from the chilly weather. This makes it the ideal breed to mix with the Standard Poodle, another venerable canine that is said to have originated in Europe.

A Newfoundland-style dog that really doesn’t shed as much and is just as beautiful, the Sheepadoodle is almost too wonderful to be true. While having somewhat distinct hair texture, this breed often adopts the Old English Sheepdog breed’s black-and-white markings. No of the generation, your Sheepadoodle is quite likely to be hypoallergenic and non shedding.

Due to their genetic instability, hybrid dog breeds may have a variety of coat colors and coat types. We do know that both dog breeds in this instance are tall and have similar face features. Finding a breeder you know and can trust can be the most difficult step.

It might be difficult to distinguish between a sheepadoodle and a bernedoodle merely by looking at them. They share a distinctive wavy or curly coat that comes in a range of colors since they are both poodle crosses. But unlike the bernedoodle, which is available in a few more hues overall, the sheepadoodle is only available in black, white, and sometimes gray.

Otherwise, depending on how much poodle DNA is present in each dog’s genome, their looks might be quite unlike or very similar. These dogs either resemble poodles or they resemble the dog that they are descended from, which is either the Old English Sheepdog or the Bernese Mountain Dog.

With a height of 24-29 inches and a weight of 60-90 pounds, the mild Bernedoodle seems strong and solid. The majority of these dogs have tri-colored coats that might have different shades of black, white, and brown (in rare cases, gray or dark red). A few may have straight hair, but most have thick, long, wavy, or curly coats. They resemble Aussiedoodles and are sometimes confused for them.

Sheepadoodles, on the other hand, are often a little bigger, weighing 50–80 pounds and measuring 20–27 inches tall. Like the Bernedoodle, their specific size is determined by the size of their Poodle parent.

A Sheepadoodle often has two coat colors, such as black, white, or red, as opposed to the Bernedoodle’s three hues. This is one of the biggest visual contrasts between the two breeds. Sheepadoodles often have silky, curly hair and either a Poodle head with a dome shape or a square sheepdog face. 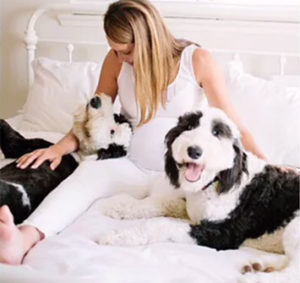 When deciding between a Sheepadoodle and a Bernedoodle, temperament is often a crucial component to take into account. You want to make sure that your dog will be sociable and calm-natured. Especially if the dog will be joining a family, you definitely don’t want to wind up with a hostile or violent dog.

Sheepadoodles and Bernedoodles both make wonderful family pets. They have a disposition that is generally similar. Both of them have a tendency to be friendly and kind, and they both make fantastic family dogs that get along with both kids and other animals.

Since they are descended from sheepdogs, sheepadoodles may attempt to herd. But they are loving, kind, and devoted. They like playing catch in the garden and cuddling with each other. Sheepadoodles are more excitable than Bernedoodles but are also more quickly calmed down. They are violent when threatened and may bark at people they don’t know, but they usually only raise the alarm.

Similar to their Bernese Mountain Dog mother or father, Bernedoodles often have a modest amount of energy. They like social interactions and make an effort to become friends with everyone. They may, however, be quickly startled and are sensitive.

Sheepadoodles tend to be livelier and more playful. They make the ideal therapy or emotional support animals since they are smart and can detect human emotions naturally. They are also renowned to warn owners of intruders with a loud, thunderous bark, which makes them great security dogs.

Sheepadoodles’ Old English Sheepdog DNA make them natural herders. Owners may regularly see them attempting to herd youngsters or other animals. This behavior is often accompanied with nipping, but with regular, loving training, it shouldn’t come up again.

What are the grooming differences between Sheepadoodles vs Bernedoodles?

How little upkeep these long-haired jackets need may surprise you. You can get rid of the thought that you see Poodles with stylish haircuts if you’re accustomed to seeing them. Sheepadoodles and Berndoodles seldom, if ever, shed. They are often nonshedding dogs and are said to be hypoallergenic. The long, somewhat curly hair of the Bernedoodle and Sheepadoodle is really simple to handle if you know how.

They need frequent grooming sessions to keep their hair short; these may grow pricey, but you can budget for them. It is advised that you choose shorter haircuts and schedule grooming appointments for your Sheepadoodle or Bernedoodle every 6 to 12 weeks.

You must plan regular haircuts and grooming appointments. You can do certain grooming tasks at home, such as clipping your hair, showering, and cutting your nails. Your Bernedoodle or Sheepadoodle shouldn’t end up with a lot of matted hair since this might hurt your dog.

Choose a length and a style that are appropriate for you. Even if you spread out your grooming appointments a little more, be ready to brush regularly. Both the Sheepadoodle and the Bernedoodle may benefit from these suggestions.

Sheepadoodles typically live between 12 and 15 years on average and are generally in good health. They still have a tendency toward the harmful illnesses that their Old English Sheepdog and Poodle parents have. Deafness, cataracts, progressive retinal atrophy, stomach torsion, and retinal detachment are a few of the most prevalent hereditary disorders from the Old English Sheepdog, among others.

Between the ages of 12 and 18, Bernedoodles often enjoy longer, healthier lives. The ailments that affect Bernese Mountain Dogs, such as hip and elbow dysplasia, eye troubles, heart problems, and Von Willebrand’s Disease, may still affect them even though they typically retain high physical condition.

Due to their Poodle origin, these dogs are both susceptible to the same diseases. Cushing’s disease, various eye illnesses including progressive retinal atrophy, thyroid problems, and numerous skin conditions like sebaceous adenitis are a few examples.

Dog owners should concentrate on healthy eating, consistent exercise, and routine visits to the veterinarian. By doing this, they can guarantee their pup’s best potential health and happiness.

Large dogs like sheepadoodles may have joint problems as a result of their size. Sheepadoodles often get elbow or hip dysplasia. The same applies to Bernedoodles. Sheepadoodles have a higher risk of contracting diseases including Addison’s, Cushing’s, cancer, and maybe skin allergies.

On the other side, Bernedoodles may have allergies, hot patches with breakouts and rashes on their skin, and eye disorders or infections. They could have delicate skin that has to be treated with care. To find out whether there are any known health problems in the line, it is important to inquire with the breeder about health tests.

Do Bernedoodles and Sheepadoodles differ in cost?

Sheepadoodles cost in the ballpark of $2,000-$5,000 depending on a variety of factors, including the breeder. Bernedoodles would be around the same.

Bernedoodles vs Sheepadoodles: which one is easier to train?

Both the Sheepadoodle and Bernedoodle breeds are quite simple to train if you work with them regularly because to their high intelligence levels. With their devoted nature, they both want to win over their masters. Sheepadoodles and Bernedoodles will respond to orders in an effort to make you happy.

Sheepadoodle pups might be obnoxious, but with patience and continuous training, they learn quite quickly. And a Sheepadoodle won’t forget anything they learn. The same trick or activity may rapidly get boring for this breed, so be careful to mix things up with fresh difficulties.

Bernedoodles like loving, incentive-based training approaches since they have a great desire to please their owners. Regular interaction with them is crucial because if left alone for extended periods of time, they may become obnoxious and destructive.