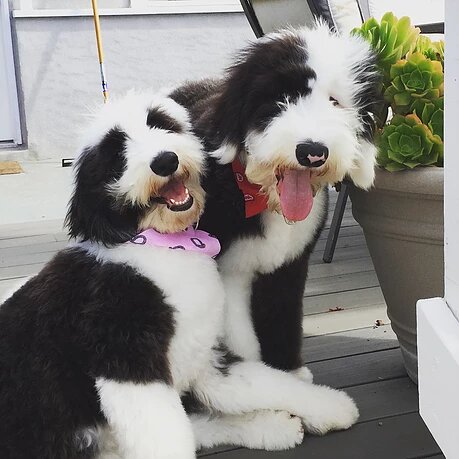 Trying to choose between the Sheepadoodle Puppies and the Old English Sheepdog? These two canines can be similar to one another in some respects while being very different in others. Discover which of these well-known breeds is the ideal canine companion for your way of life by reading on!

What is a Sheepadoodle?

An Old English Sheepdog and a Poodle were crossed to create the Sheepadoodle. A normal Sheepadoodle will retain the color or markings of a Sheepdog while inheriting the curly, hypoallergenic coat of a Poodle. They are affectionate, intelligent, and have a placid disposition. Sheepadoodles often range in size from medium to giant. However, because Poodles come in a variety of sizes, including miniature, standard, and toy, the size of the pups from crossbreeding will differ. Other names for the Old English Sheepdog and Poodle cross include Sheepapoo, Sheeppoo, Sheepdoodle, and Sheepdogpoo. The name Sheepadoodle was first coined in the United States in the 1960s; the term was first used in 1992. It’s a breed derived from a huge genetic base. designed in theory to satisfy the requirements of the US military.

What is an Old English Sheepdog?

One of the best sheepdog breeds, the Old English Sheepdog has a contemporary appearance. It was initially developed in Great Britain more than 200 years ago with the intention of caring for both sheep and cow herds. In frigid climates, it is one of the favorite breeds for grazing. They are working dogs that can protect sheep and flocks from wolves and other huge predators. Their duty was to herd animals across a great distance in order to mark and perfect their unique step and cover that distance quickly.

You can’t go wrong with a Sheepadoodle or an Old English Sheepdog if you’re searching for a companion dog. They are a fantastic choice for families because of their outgoing and amiable personalities. Both have a strong affinity for family, and they are eager to join it. Sheepadoodle simply behaves better when it comes to being around kids. Both breeds require a firm hand to lead them in the proper direction since they are powerful and eager. Some Old English Sheepdogs can be guard dogs even if you don’t train them to be watchdogs. They bark loudly, and some of them are notoriously obnoxious barkers. Early human and animal interaction is necessary for them. They may become hostile in certain instances when you don’t educate them on how to be sociable, especially the males.

Sheepadoodles have hybrid vigor, which makes them healthier than regular purebred dogs. Sheepadoodles, unlike other bigger dogs, might live up to 12 to 15 years if properly cared for! However, they are still prone to certain health issues, particularly those that are more common in the breed, much like other dogs. It is preferable to get acquainted with these issues as soon as possible so that you will be better prepared to tackle them in the future.

Inexperienced owners may want to think carefully before acquiring these dogs. When teaching your dog, patience, effort, and consistency are crucial. You could also think about hiring a professional trainer if you don’t believe you can successfully educate your dog on your own.

These dogs don’t have a vastly different lifespan. The Old English Sheepdog is a breed of dog that lives an average of 10 to 12 years, but with proper nourishment and care, it may live a little longer. The Sheepadoodle has a lifespan of 12 to 15 years.